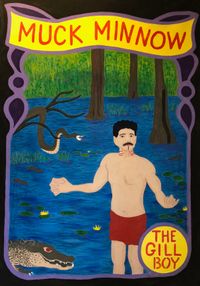 Portrait of the Artist as Political Prisoner

Art in Odd Places runs along 14th Street between Oct. 17 and 20th during afternoons. Watch for Billy in his wearable chain-link cage sculpture.

Performing for the Dead

Billy X Curmano and Linda Mary Montano will split an evening of performance art in conjunction with the exhibition "As Far As the Heart Can See" and "Reimagine End of Life". Curated by Nicolás Dumit Estévez RafulCuratorial Fellow: JP-Anne Giera Community PartnersGay Men’s Health Crisis (GMHC)Reimagine End of Life

As Far As The Heart Can See

“Call me Billy X. … I’ve come upon a legend, perhaps a false legend, but nonetheless a legend worthy of note. It concerns the lost New Amsterdam Passage.” For the Art in Odd Places Festival (AiOP) and with a nod to mariners everywhere, Billy is forming an Exploratory Expeditionary Art Adventure Team to search for a lost New Amsterdam Passage, which just might connect the East and Hudson Rivers. Water, water everywhere - the Hudson River to the west, the East River to the east, water towers above, pipes below and on the rise with just a granite island holding those waters at bay. The art adventurers need a short cut to bring “Greetings from his Mississippi River to the Hudson and East Rivers” within the relatively brief time span of the AiOP Festival. You could become a part of this amazing art adventure. We are looking for a few good people to fill out the Exploratory Expeditionary Art Adventure Team. As with most explorers, we could really use an indigenous guide to find what may well already be there. Artists, musicians, arty-types, techies and performers of any ilk are especially welcome to apply. Team members will explore the passageway with historic Chelsea, Gramercy, Union & Stuyvesant Squares, and the Meatpacking & Flat Iron Districts to the North and Alphabet City, the East, West and Greenwich Villages to the South with a stop on and under the Highline.

Billy X is a guest on this popular variety radio broadcast statewide.

Mni Wiconi Water Is Life: Billy will open the international festival with a performance and installation on the first day and remain as an artist in residence working on building water awareness. He teams with an award winning hydrologist, Marco Cremona, to demonstrate both sacred ritual and practical application to protect our most precious resource.

Enacting the Text: Performing with Words 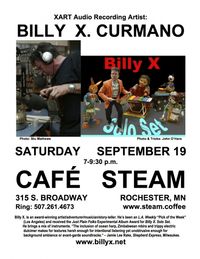 Billy X. Curmano will be switching up on a number of instruments, singing and telling short and tall tales. "The inclusion of ocean harp, Zimbabwean mbira and trippy electric dulcimer makes for textures harsh enough for intentional listening yet unobtrusive enough for background ambiance or avant-garde soundtracks." - Jamie Lee Rake, Shepherd Express, Milwaukee.

Billy X. Curmano, the nap soloist, will greet the public after awakening from the 24-Hour World Wide Rolling Nap and the Witoka Contemporary collection will be open for viewing.

Billy X. Curmano will attempt to bed down for “The 24-hour Worldwide Rolling Nap” March 19th at 7:33 a.m. Central Daylight Savings Time and awaken with the 2015 Spring Dawn at 7:33 a.m. March 20th. The performance and environmental statement encourages a paradigm shift to: Relax... Do Less... Save the Planet. (It's not EZ.) Actually, the planet will be okay... Humans... Not so much.

"How Do You Sleep?" Installation Visitation

The "24-Hour Worlwide Rolling Nap" installation "How Do You Sleep?" will be open for visitation Thursday night preceding the performance. It includes a "Bed of Nails" with a "Pillow and Blanket of Tiny Tacks", "Kevlar Pajamas" and the "Formal Strait Jacket". The red frame bed boasts 2,395 galvanized steel 3" roofing nails, the blanket 2,766 galvanized steel 1/2" cut tacks and the pillow 640 black steel 1/2" cut tacks.

Catch as Catch Can. Billy will be carrying an Mbira and small Pigs Eye amplifier to perform "I Think on These Things" during the Peoples Climate March.

Catch as Catch Can. Billy will be performing "I Think on These Things" at Union Station and aboard the Peoples Climate Train between Chicago and New York City. If conditions allow, he will also perform "Greetings from the Mississippi to the Chicago River".